The below photo of a Red-naped Sapsucker was taken in early July, 2015, in a place often referred to as Valley X (in British Columbia) using High-speed Strobe Photography (HSSP). I have enjoyed many years of photography in this valley having never yet encountering other photographers. My reasoning for referring to this pristine habitat as Valley X is in consideration of protecting the natural meadows, lakes, forests and streams of this valuable wildlife habitat on First Nations Lands. 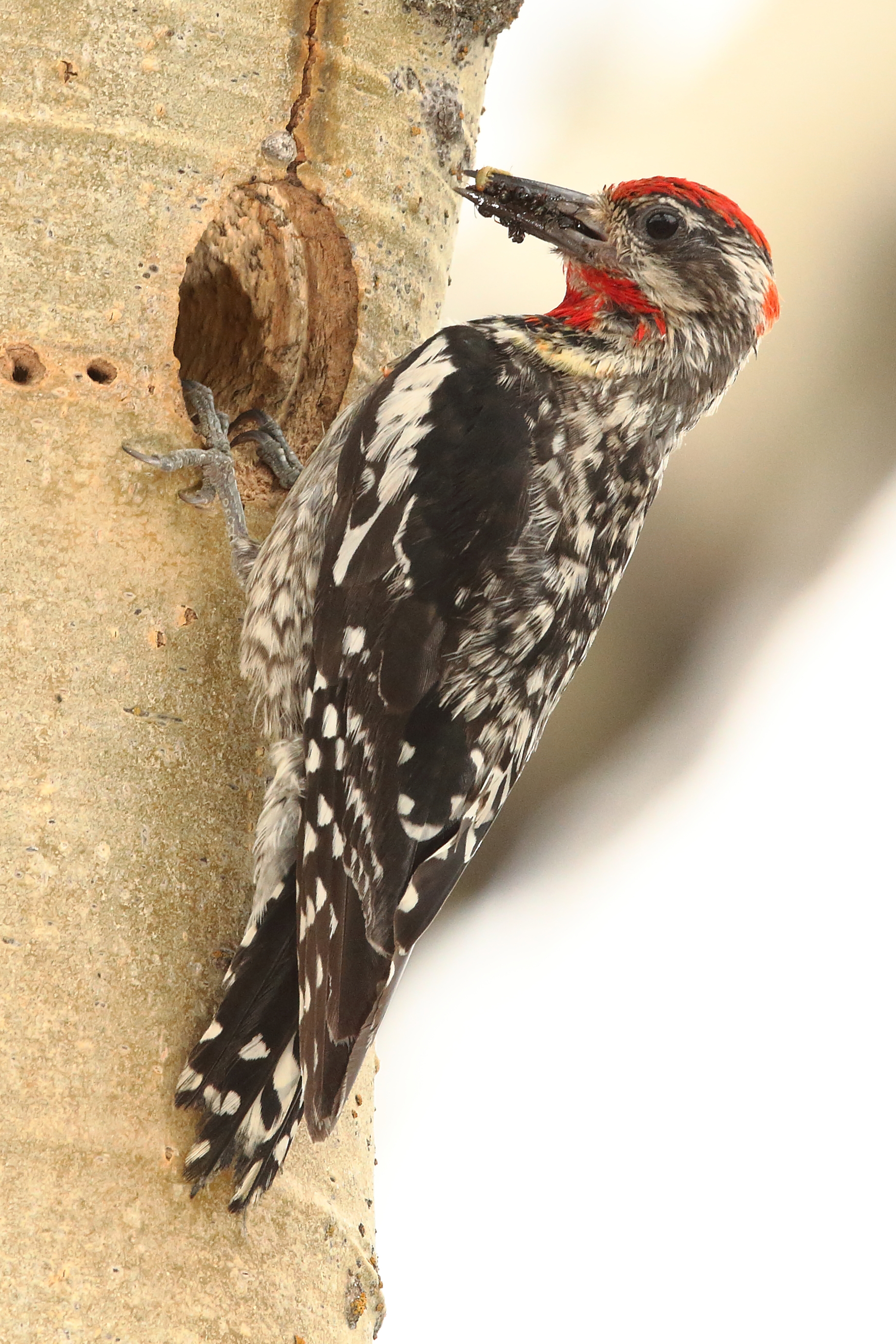 I want to write about the very controversial subject of photographing birds at the nest in North America (and many other countries of the world). I want to emphasize that High-speed Strobe Photography can be used in a safe manner and be far less disruptive than an untrained person walking up to a nest for the sole purpose of getting a photograph of the babies. These people often cause the young to fledge prematurely. HSSP should never be attempted without proper training which includes the taking of ornithology courses that teach an understanding of environmental risks with wildlife habitats. HSSP should not be attempted without proper training. Prior to proceeding into the field, it is best to consult the local authorities (this especially applies to any endangered or at risk birds). The welfare and well-being of all wildlife, including the land we walk on, must be given full consideration at all times. For the record, I trespassed onto First Nations Lands with their full permission.

To do HSSP proper equipment should always be used that will permit shooting from a close but safe distance from the nest. For the Red-naped Sapsucker shoot, I used the Canon 5D Mark 111 body in conjunction with the Canon 500 mm, ET-138 4.5 lens combined with the Canon EF 1.4 11 extender, providing a focal length of 700 mm. On top of the camera was a Canon ST-E3-RT speedlite transmitter. The camera, lens, and transmitter were mounted on a Milano MI-CF4SQR carbon fibre tripod. I used a 15-pound lead ball, as a hanging underweight under the centre of the tripod. The three slave units were Canon 600EX-RT flash units, mounted on Optex OPT155 tripods. The slave units were set to fire by the master speedlite transmitter, mounted on the camera’s hot shoe. It is imperative that equipment be carefully cared for and be ready to go at all times. This includes charged batteries for all the equipment.

The nest was located 16-feet high in an Aspen tree. This shoot was photographed from what I considered a safe distance. The camera was set 35-feet from the base of the tree for full frame images of the birds. To get the height of the strobes to within 8 to 10-feet of the nest, the tripods were adopted to receive 5/8″ x 5/8″ x 1/16″ light wall aluminum channel extrusions.

Upon finding the nest, I sat and observed the comings and goings of the parents for several hours during the incubating period. I wanted to determine the best place to set up my equipment well in advance of any photography. I left the area undisturbed knowing that I would be back in 2 or 3 weeks for the best photography. I was hoping to capture an almost ready-to-fledge baby with its head sticking out of the nest hole being fed by an adult. (Often nests, for one reason or another, are simply not conducive for bird photography. If this happens, forget about them and keep looking. I found two previous sapsucker nests prior to this one that I passed on).

There was much to be learned by observing the adult birds feeding their young. You’ll learn the direction from which the parents enter and exit from the nest. This information will help in determining the setup for the camera and strobes. Much of what I learned didn’t appear in any books that I’d read on sapsuckers. From observation, I learned that the adults fed mostly ants to the babies, but also, on occasion the bitter tasting juniper berries. The adults were getting their ants from a nearby anthill. I noticed that very time after feeding the parents would fly to a nearby young Aspen and wipe their beaks and naps on a 3″ in diameter branch. At first I thought they were cleaning their bills. I then got out my 10 x 40 B Zeiss binoculars and observerved them more closely. I was wrong. I noticed that the branch was progressively drilled up the branch with holes for several feet. I watched them go from recent drillings and wipe the fresh sap onto their beaks and side of their heads. They were actually wiping the fresh sap onto their beaks and fronts of their heads after which they would quickly drill new holes if required. I watched them tilt their heads from side to side looking at each drilling for running sap. They would then fly to the ant mounds and collect ants on their beaks and naps. If one looks closely at the photograph, you can see the ants and feathers matted as a result of the sap collecting.

The first step in returning to the area was to quickly setup the equipment. I did this while the adults were away foraging. They were away sapping  for 5 to 10 minute intervals. If I was disrupting the feeding, the parents let me know immediately. It didn’t take the birds very long to realize that I didn’t pose any threat.

The second step upon returning to the nest was setting up a camouflaged pop up blind uphill and well back of the nest. Concealed within, I was able to fire the camera from within with a hot-wired cable-release.

I placed the strobes around the nest cavity and then set their strength, in this case 1/8 power, to synchronize with the ambient or available light from the sun. The left and middle strobes did an excellent job of knocking out the shadows of leaves from the nest tree. The right-hand strobe, closer to the nest than the other 2, gave rim lighting to the backside of the bird. With this shoot my settings were as follows: ISO 1000, camera speed 1/200 (for the strobes), f-20. The RAW files of the full-frame captures of the adult were razor-sharp. As well as seeing the catch-lights in the eyes of the adult sapsucker, I was able to see the eyes of the ants!

This shoot took place over 4 days and resulted in 2 trips to Valley X. Unfortunately, I never did see any of the babies at the entrance of the nest. When I made a third trip to Valley X, the babies had fledged.

I have a policy to leave these pristine valleys without so much as a footprint and when walking two and from his truck with his equipment tries to stay in the same footprints on the ground to disturb as little vegetation as possible. 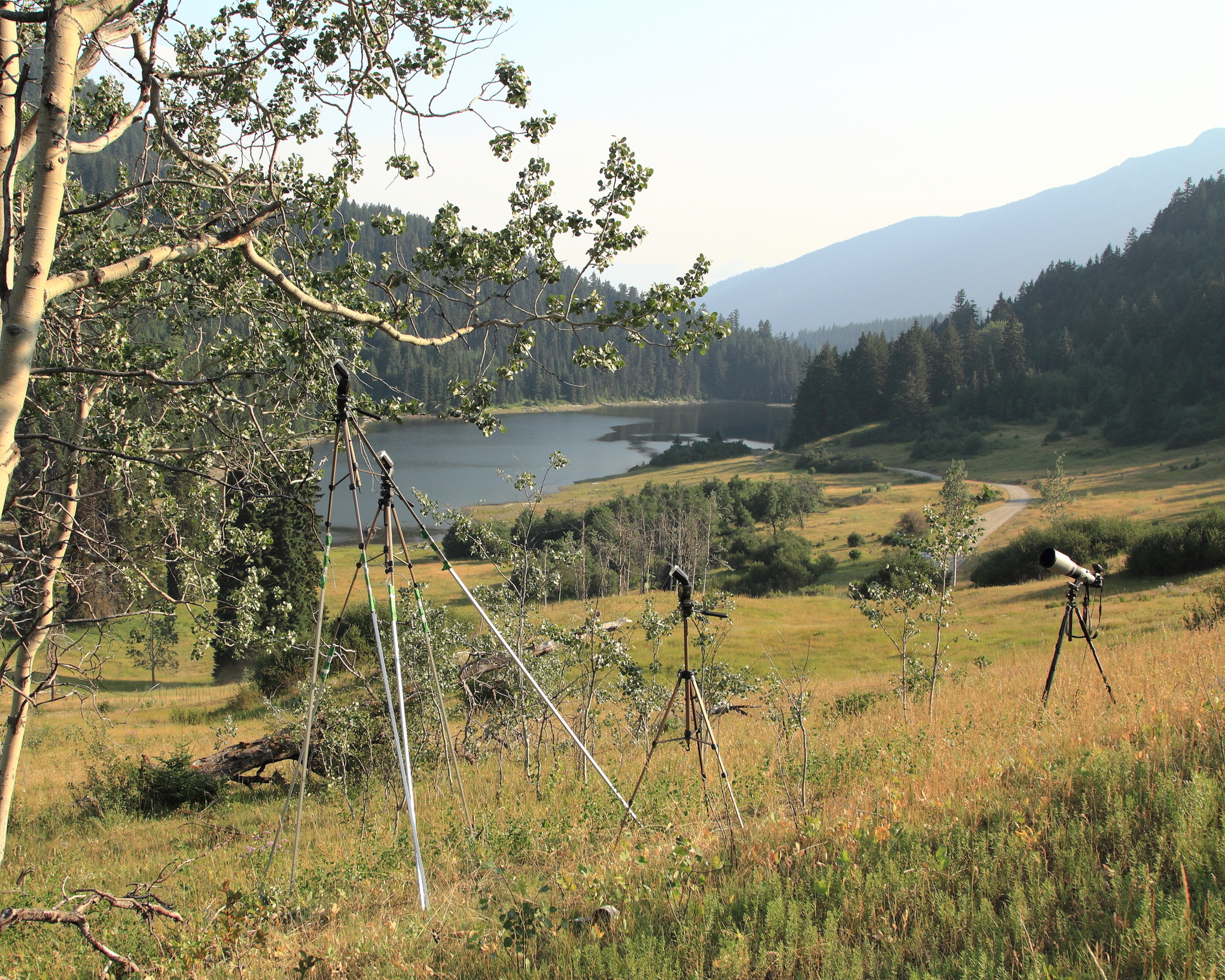 George’s setup with 3 strobes to photograph a Red-naped Sapsucker.

I’m quite sure that this is going to be a controversial topic; especially because my associates and I often use high-speed strobes to photograph the smaller birds such as kinglets, bushtits, creepers and the smaller wrens. Our reasoning is quite simple, these tiny birds move so quickly that they can literally fly 3-4 feet before one has time to hit the firing button on the remote. Occasionally my young grandchildren accompany out into the bush to photograph one of these tiny birds coming and going from its nest. It’s amazing that their reflexes are so much faster than mine. I’ll have my camera and strobes set to fire at 3-frames per second. The strobes, set at a reasonable distance from the nest and at 1/8 or 1/16 power, are usually able to stop these birds in flight. Many novice photographers probably don’t know it but light from strobes diminish as the square of the distance. For example, strobes set at 4 feet from a subject are 4 times more powerful than the same power of strobes set at 16 feet.

I tell my grandkids to hit the button as soon as the bird takes flight from any branch that’s less than 5-feet away from the nest. If they are lucky, the middle or last frame captures the bird. As often as not, they capture  nothing at all and birds such as the Black-capped Chickadees, Pacific Wrens, and Brown Creepers disappear into their nest cavity without being photographed.

I am certainly not an optamologist and I don’t pretend to know much about a bird’s retina. As a layman – and a kid going to matinee movies – I recall exiting the dark theatre and going into bright sunlight. The retinas of my eyes closed down to pinpoints just like the iris of a lens closes down to f-16, f-22, or even smaller. It makes sense to me that photographing birds in bright sunlight with strobes powered down to a short flash duration would not harm the subjects. Their irises would be so pinpointed that the flash duration of the powered down strobes (as short as 1/10,000 second) would have nil effect.

I began my bird photography in the mid-1970s at a time when it was quite acceptable to photograph nocturnal birds bringing food into their babies in pitch darkness. An older associate – who was separated from me by 3,000 miles – photographed owls 25+ feet up in a tree. He and his partner used scaffolding to reach the same height as the nest. At twilight the two photographers set their high-powered strobes and prefocused the camera in readiness for nightfall. Concealed in a large blind, they illuminated the nest with a low-voltage flashlight to watch as the parents came in with food, most often a dead rat but on occasion a dead songbird. The bright flash of their strobes in the pitch darkness had to have blinded all the birds at the nest. The irises of these birds would have been wide open on account of the darkness.

I was not immune to this type of photography and in 1985 accompanied government employees to a seabird reserve to photograph murrelets and auklets. I used a very elaborate triggering device (for the time anyway) which caused the adult bird to take its own portrait upon exiting the burrow by stepping on the triggering platform. Totally blinded, the birds often flew full tilt into trees. 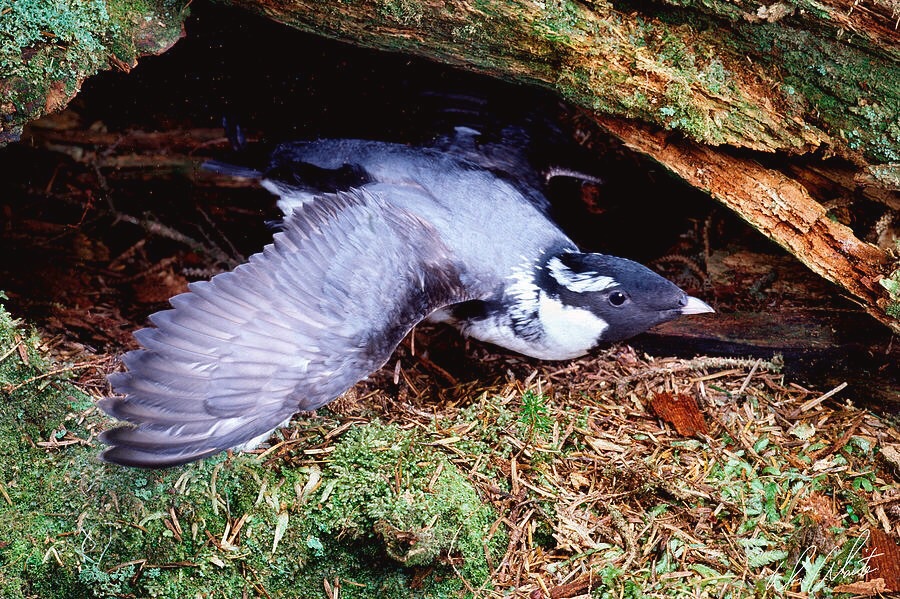 An Ancient Murrelet captures its own portrait by stepping on a photo-electric triggering device coupled to the Kenneth A. Olson’s 4-unit strobes that were in turn connected to a Hasselblad Electronic body with a telephoto lens. The strobes were as big as dinner plates and kicked out far more light than any of the commercial units now on the market. This capture was taken at 1/500 second at f-22 on the camera with the flash units, set 4-feet away from the nest firing at an incredible 1/20,000 second. The image was taken on Kodak Ektachrome 64 film. Taken on Reef Island, Haida Gwaii (Queen Charlotte Islands), 1985.

As of late, I’ve spent a great deal of time perusing other professional wildlife photographers websites and finding images of owls with black backgrounds. To me, it’s pretty obvious that these captures took place at night and in the dark. This type of photography is totally unacceptable today and is definitely harassing the owl – and as such is subject to charges under Canada’s Migratory Birds Conventions Act.

An associate and I were charged under the Migragtory Birds Conventions Act and the Species at Risk Act in 2007. There were 18 indictable (criminal) charges in total and the maximum fines were a staggering $4,500,000. These fines are much higher today.