Jeffrey J. Jackson and I recently had drinks and lunch with retired biologist Richard R. Howie in Kamloops and the three of us talked about the pros and cons of nest photography. We discussed the concern among environmentalists and wildlife management agencies that the looking for nests and improper photography techniques could cause stress or disturb the birds at their nests or even result in predation and loss of the brood. Rick mentioned that there had been conflict between bird watchers and photographers for a variety of reasons which may have included nest photography. He also stressed that management authorities will always be vigilant about the contravention of the laws and that photographers could be charged if they were found to be in contravention of various statutes. I have to point out here that charges in Canada are criminal and come with maximum fines of $250,000 and up to five years jail time. Over the next few weeks the Rick sent me links to several sites that referenced bird photography ethics.

I was really perturbed when I read about the use of mist nets to capture birds for banding. Having photographed small birds for several years, I am well aware just how fast they fly. One ornithologist talked about the bruising on the bodies of birds caught in mist nets. He knew what he was talking about because he literally skinned thousands of birds throughout his career. Here’s the link to the entire article:

One section of the Audubon web site was about the photography of owls. Here’s some quotes, “Unfortunately, there’s little scientific research on the topic, but we do know a little about how bird vision works. The eyes of owls and humans respond to light in the same way, says Ellis Lowe, a professor of physiology at Cornel University of Veterinary Medicine. When the eye is exposed to bright light – like a flash firing in the dark – photoreceptors cells can become saturated. This causes brief “functional blindness”, a glowing afterimage that affects the ability to see and recognize objects. It can take anywhere from five to 30 seconds to readjust.”

The article continued, “Some experts, such as Denver Holt, director of the Montana-based Owl Research Institute, argue that the educational value of these images outweigh the potential risk – if the images are used for greater public awareness and conservation, for example, and the photographer works in tandem with researchers who study and understand the particular species. He allows limited use of photography when his team bands owls at night.”

Here’s the link to the entire article:

From past experiences, I would never ever attempt to photograph birds at night.

I was pleased to see that the 2016 Audubon contest winner of $5,000 U.S. was a picture of a pair of Prothonotary Warblers at their nest cavity. The photograph was taken with multiple flash.

Personally, I feel that nest bird photography can greatly contribute to man’s understanding of our feathered friends. 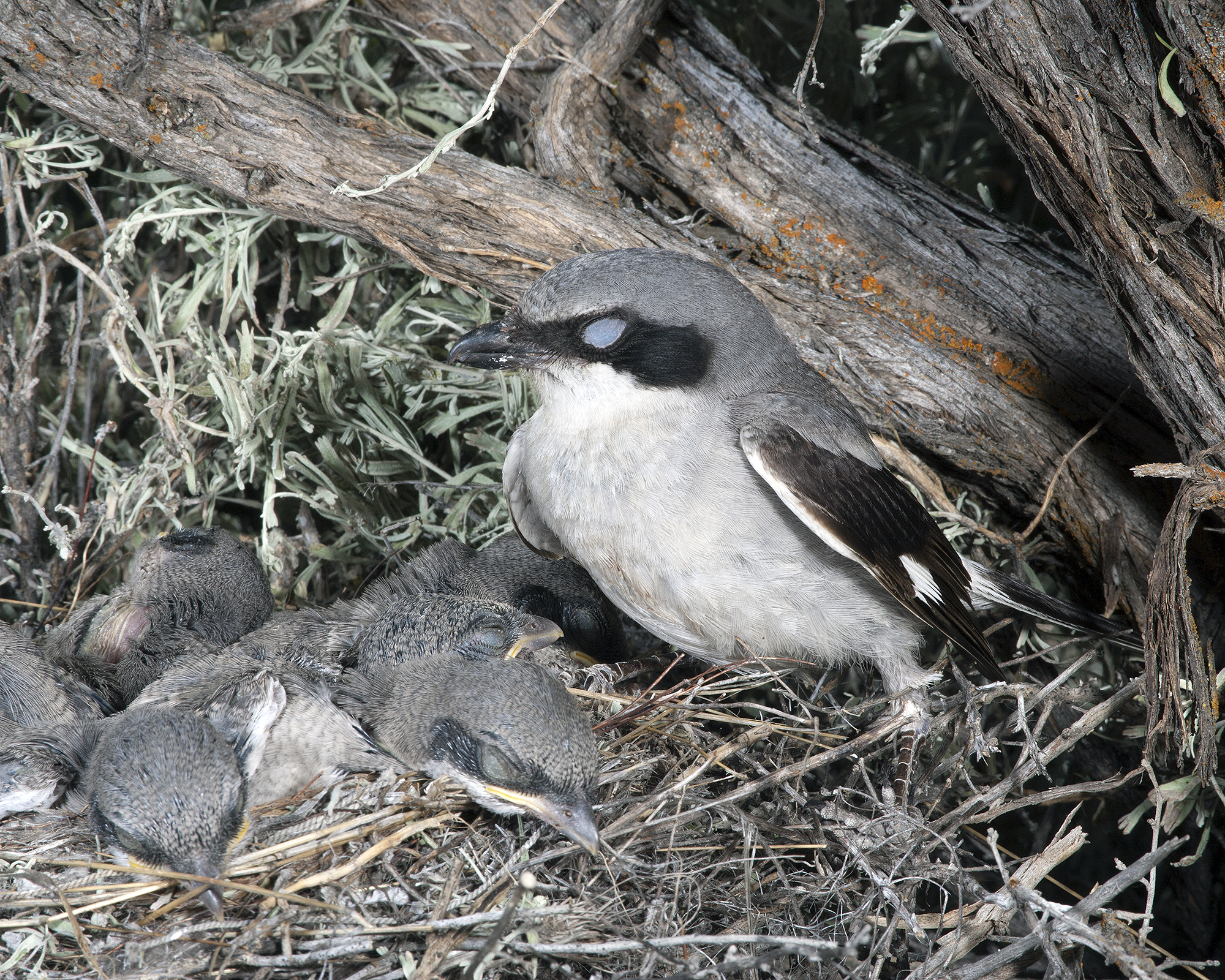 A Loggerhead Shrike has a noon-day siesta with its almost ready-to-fledge young.

A male Mountain Bluebird tends to his almost ready-to-fledge young residing in the abandoned nest of a pair of American Robins. Never before documented by photography, Damon S. Calderwood wrote an article for ‘Living Bird’, one of the most prestigious bird magazines in North America. 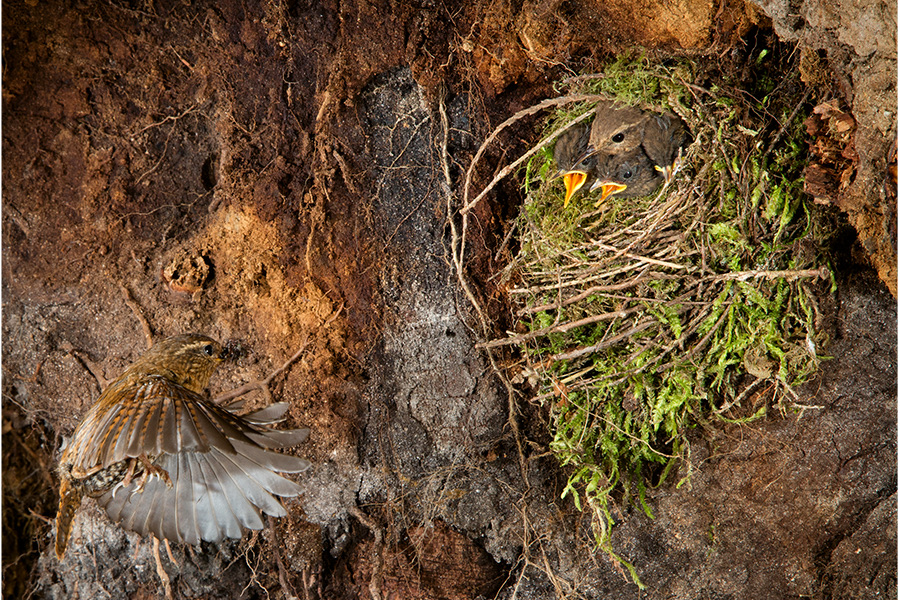 A Pacific Wren (previously the Winter Wren) with food  flies to its nest featuring its mate and at least three babies. This nest was located on a park trail 4-feet off the ground.

For several years I’ve dreamed of a special Canadian Federal (or in the US National) permit for bird photographers to be allowed to set up on nests following a 40-hour course given by a professional bird photographer and an experienced biologist. Below would be the requirements.

1. – I hereby apply for a permit authorizing me to photograph migratory birds at nests.

2. – I acknowledge that I have successfully completed a 40-hour course in ‘Bird Photography at Nests’ that was taught by qualified wildlife photographers and biologists.

3. – I agree that if a permit is issued to me that I will provide my notes about any unusual observations and six copyrighted images at 8″ x 12″ at 100 dpi to Environment Canada, Wildlife Enforcement Section by year’s end.

4. – I agree that if a Species at Risk bird is encountered to immediately contact the nearest Canadian Wildlife Service for guidance prior to any photography.

5. – I am aware that the permit does not allow me to photograph migratory birds at nests in any Federal or Provincial Parks, Federal or Provincial Game Preserves or Bird Sanctuaries without the authority of Environment Canada, Wildlife Enforcement Section nor does it allow me to photograph in any public park within the limits of any city, village or hamlet without permission.

6. – I am aware that this permit does not allow me to trespass on privately owned property without the permission of the property owner.