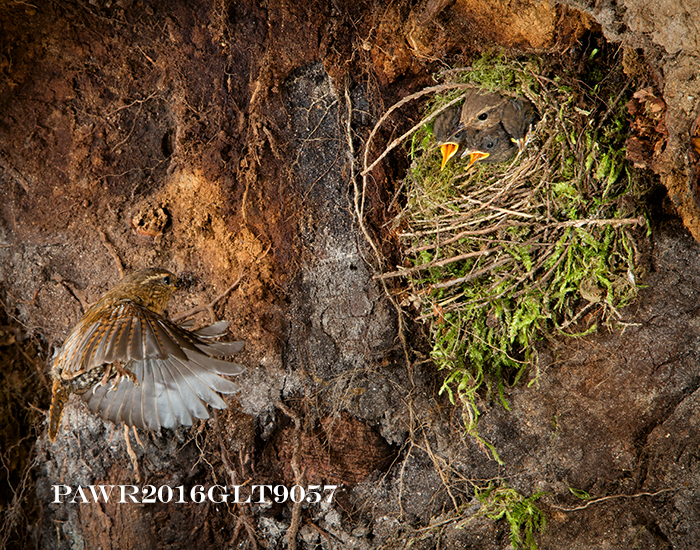 A pair of Pacific Wrens (previously the Winter Wren) attend to the needs of ready-to-fledge young.

I’ve always tried to capture as many ‘elements’ in a bird photograph as possible. The ‘elements’ in this case are both parents in the same photograph, the babies, and the beautiful green moss and tiny rootlets that make up the nest. There is a bonus. The one parent is frozen in full-flight. Everything in the photograph, due to the introduction of 3 high-speed flash units, is razor sharp. The text on the image is for indentification purposes: PAWR/Pacific Wren – 2016/year – GLT/initials of the photographer, in this case George L. Tickell – and finally 9057/the number assigned by the camera to the photograph.

When designing my web site 15 years ago, I decided to adopt the standard 4-digit abbreviation for common birds. For the abbreviations to every bird in the world go here:

George used his newly purchased Canon 5Dsr body with a 100-400 zoom lens in conjunction with 3 -580 high-speed strobes. The settings on the strobes were controlled by George at the camera. In this case, George set his stobes at only 1/16 power for a flash duration of about 1/9,000 second which was fast enough to stop the breaking in flight of the adult as it came in to the nest.  With his new camera, George was able to set his ISO (the sensitivity of the light on the sensors) very high in order to have his depth-of-field set at f-29. Because of the short flash duration, George was able to set his camera to fire bursts of frames as he hit the button on his cable release whenever the birds flew into or out of the nest.

Contrary to what some biologists might think, the very weak but short flashes from the strobes do not impact the birds. This is because the irises of the birds’ eyes would be closed down due to the daylight. This would be different however photographing birds at night.

I was looking for bird nests with wildlife photographer George this past summer when we discovered this wren nest in the root tangles of an upended Western Hemlock in Allco Park in Maple Ridge. This nest was perfect for photography being located on a much travelled pathway and only 4-feet off the ground. When discovered, the parent birds were sitting on eggs. George and I decided that we would not attempt any photography until the babies were older since the best photography of birds at the nest always takes place as the young get closer to fledging. George and I took turns using his camera for three days. Although the 3-strobes were set up only a few feet from the nest, the birds came and went on a regular basis ignoring the lights and us. The camera with the 100-400 zoom lens was about 6-feet from the nest. The birds were so tame that George and I were able to sit comfortably chairs and do shifts to take the photographs. While one of us did a stint taking photographs, the other looked for new nests. Several times each day teachers with young school children would stand behind us and watch the comings and goings of the birds.

I explained to George that the ultimate photograph would be the two birds at the nest at the same time with the babies looking out from the nest. This would have to happen just before the babies fledged. When Pacific Wrens are in close proximity to each other nest at the nest an adult often does a ‘flutter’ as a way of greeting to its mate. Although this happened for us on several occasions, neither George nor I were able to capture the two birds in a pleasing pose. George did however get a ‘family’ photograph.