In 2006 David J. James, birding associate Damon S. Calderwood and I drove down to Burns, Oregon, for almost two months of photographing birds at the nest. It was an exciting time and we managed to photograph 29 different species.

For me the most rewarding discovery was a pair of Mountain Bluebirds occupying the abandoned nest of American Robins. This phenomenon had been written about in Arthur C. Bent’s ‘The Life Histories of Birds’ but had never been photographed. We had surmised that cavity nests were at a premium in the area and the bluebirds had resorted to the robin’s nest. The site was perfect for photography as it was only 4-feet off the ground in a juniper. I immediately set up my blind and strobes around the nest. I cut two dead branches off the nest tree after one of the sharp sticks poked me in the eye. I also cut some live branches from a neighboring juniper and placed them in behind the nest. My purpose for this was twofold – to provide background for the photography and to prevent the adults from “coming in the back door”. Almost immediately the adult birds accepted my presence and came in with food on the average of every five minutes to feed the babies. Almost every time an adult would come into the nest, the bird would dig down into the robin nest’s clay bowl as if trying to excavate.

When I left in the evening I covered the nest with the cut branches making sure that there was a way for the parents to get to the babies for feeding and brooding. I knew from experience that baby bluebirds, because they are cavity dwellers, are very noisy. While taking my photographs, I saw owls, hawks and shrikes within earshot of the nest.

Right in the middle of my photography on the third day a  state trooper happened to see my setup and decided to investigate. He had observed my parked Sports Utility Van with my logo and Waite Air Photos Inc. on all 4-sides and had decided to investigate. He saw my blind set up about 8-feet from the nest. He also noticed a saw and correctly concluded that I had used it to cut the branches. I tried to explain that my placing of the branches had probably saved the lives from nearby predators. My explanation fell on deaf ears. He gave me a $299 American maximum misdemeanor for harassing wildlife: to wit Mountain Bluebird. To make a story short, I had my day in court, plead guilty, and paid $225 American (the minimum allowed by law). This was my first time to ever have an encounter with the law over birding Things had certainly changed during the time that I had been away from any serious bird photography. 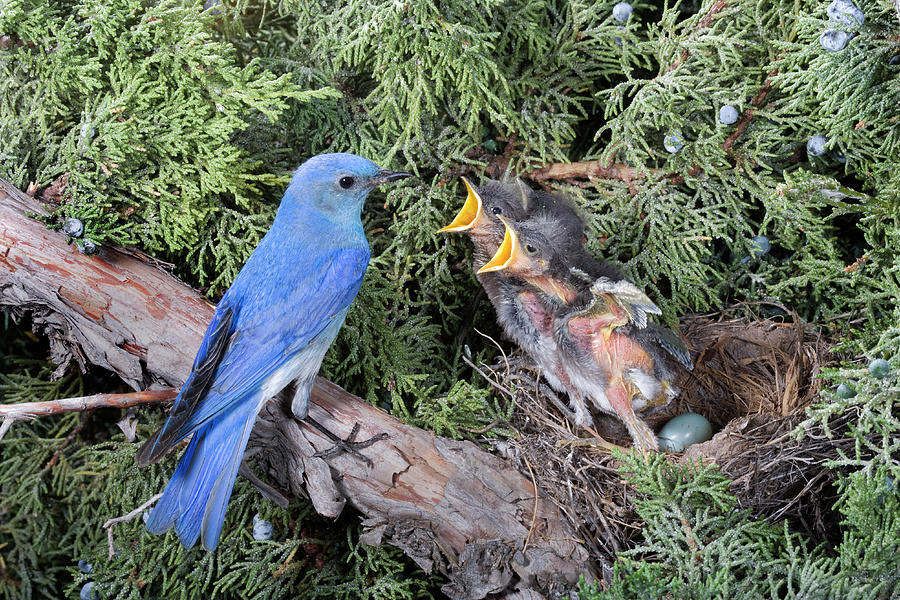 I photographed this male Mountain Bluebird attending to his ready-to-fledge young residing in the nest of an abandoned American Robin, first time for this to be documented with photography. Damon S. Calderwood wrote an article that was published in the ‘Living Bird’ – one of the most prestigious bird magazines in North America.

To say that I was upset with the ticket would be an understatement. I immediately got in touch with the district biologist in Burns and invited him to accompany me to photograph a pair of Loggerhead Shrikes. I had earlier discovered the nest when it still contained eggs. I was a little taken aback when he arrived out at the nest and began taking photographs of my setup. I was beginning to think that perhaps I’d set myself up for another ticket. He took the first shift in the blind and I watched from my SUV from the roadway. The next fifteen minutes seemed like an eternity for me but then there was a series of quick flashes from the strobes as both parents came in with pieces of a skinned mouse. One of the pair had caught the mouse and the pair had taken their time carving it up into small pieces on a nearby “butcher block”.  This block, simply a dead tree, was used by the two birds to cut up their larger prey and was located about 50 feet behind the blind. The biologist stayed with me for a couple of hours. After the photography session, the biologist and I visited a restaurant in Burns and he agreed to issue us Canadians permits to photograph birds. Surprisingly, no such permit existed however a permit did exist that allowed teachers to take students out during the breeding season to look for nests.

A day or two later, I contacted the a biologist in Salem, the state’s capital, and talked about the circumstances of my misdemeanor. I told him that the trooper failed to see the big picture and that individual farmers were cutting down hundreds of acres of hay and that nesting birds were being cut up and shredded by the thousands if not millions. He tried to tell me that the farmers held off haying until the nesting season was over. Somewhere in the conversation I interjected that I was a farm boy and suggested he drive to Burns to see for himself just what the farmers were doing. I spent on to explain that farms were opening flood gates and that birds on one side of the dikes were being flooded out while birds on the other were being left high and dry resulting in an untold number of deaths to birds per acre. I told him that grazing cattle stepped on God knows how many nests per acre. A burocrat, he gave me the phone number of the top national biologist in Washington, DC.

She and I talked and I told her everything that I’d discussed with the Salem biologist. I even suggested a national permit for knowledgeable bird photographers be given consideration. She was very apologetic and said that the trooper shouldn’t have given me a citation unless I’d caused the death of the birds. Before hanging up, she told me that she’d send faxes to all the law enforcement agencies in and around Burns instructing them to leave the Canadian bird photographers alone. 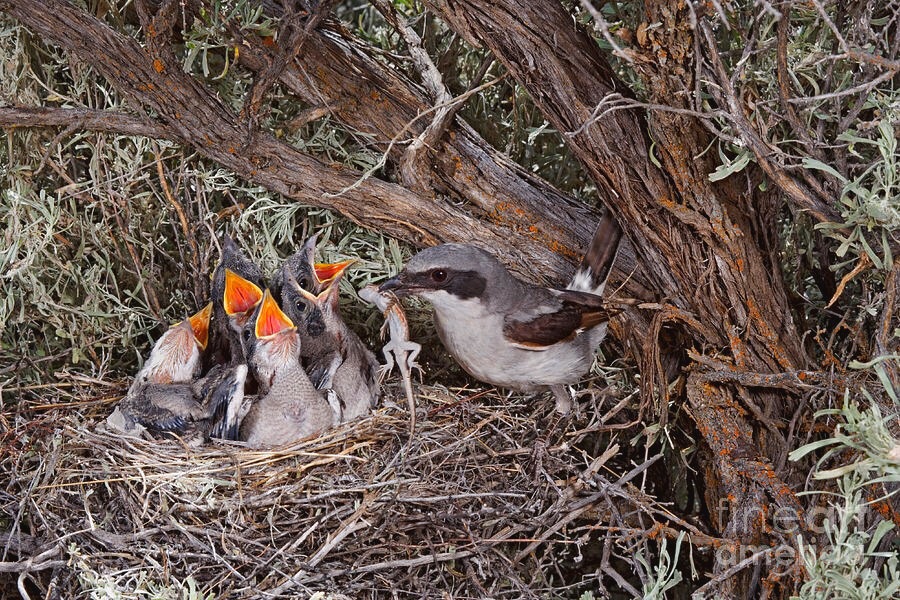 An adult Loggerhead Shrike brings an Alligator Lizard to feed whole to one of its almost ready-to-fledge young. 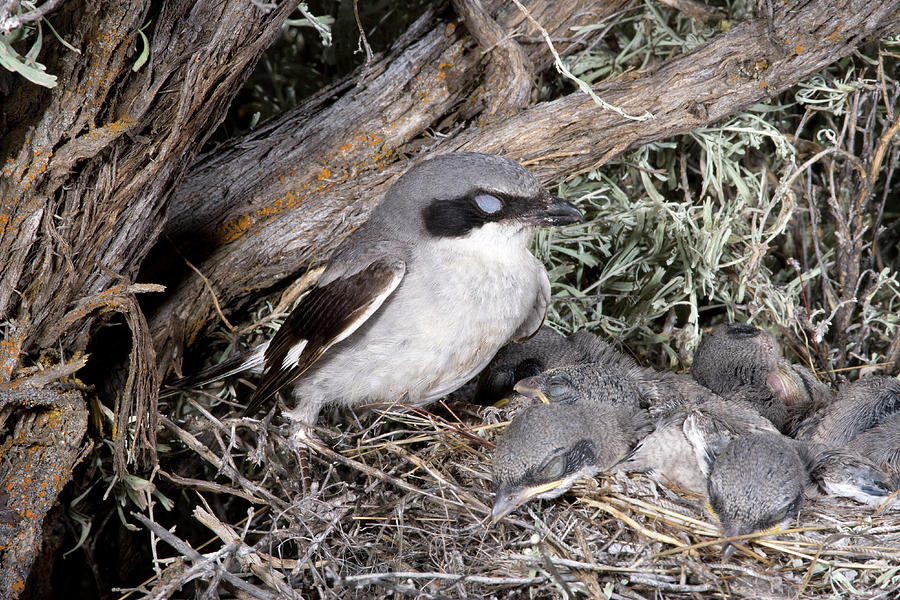 A Loggerhead Shrike and its almost ready-to-fledge young take a noon day siesta. Note that this image has been ‘flipped’ in Photoshop when compared to the one above. 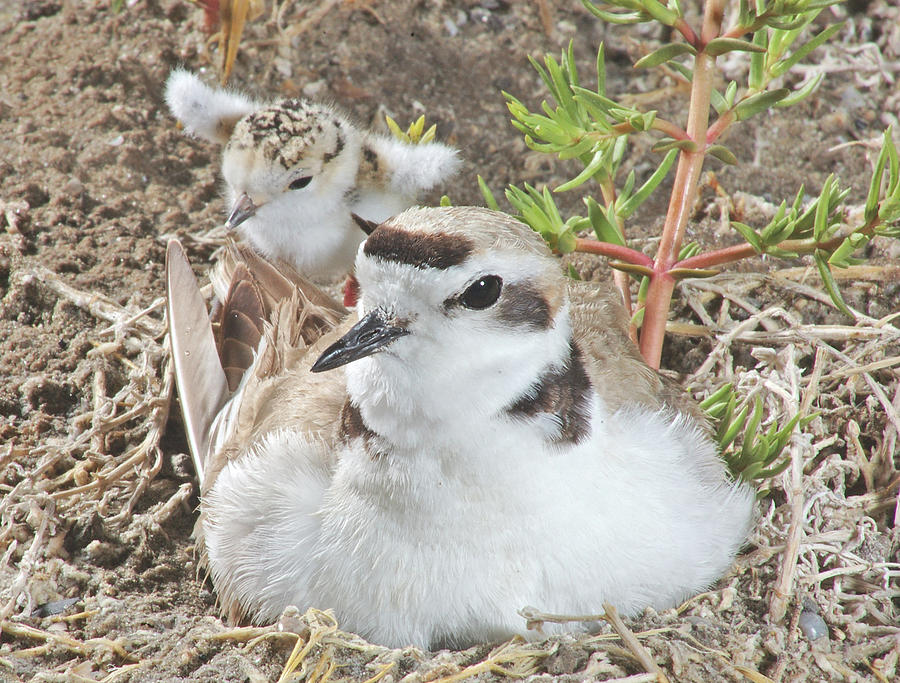 A Snowy Plover moments before exiting the nest with its dried out young.